Abdollah's Magic Turns heads at the BBC by making a chair from a log by hand!

When longtime customer of Scott+Sargeant, Abdollah Nafisi applied to participate in the BBC2 documentary the “Victorian house of Arts and Crafts” last August he was not expecting to hear back. But he was of course over the moon to be selected out of some 3000 applicants and then invited to show his skills by making a vessel in 1 hour, being interviewed and finally accepted to “the process”. Abdullah's work has been deeply influenced by the Arts and Crafts movement and the fellowship, designs and ethos of the great proponents of the movement of William Morris &Co

What he hadn’t bargained for however was to be faced with a huge log no electricity and given 5 days to use his skills to turn it into a Sussex chair. He had been given a set of rather inadequate set of blunt tools but fortunately as the mastercraftsman that he is he could not use anything he did not “know” so had taken his favorite tools with him including a veritas spokeshave, his grandads drawknife , his Lie Nielson planes , hand router, crosscut and dovetail saw. 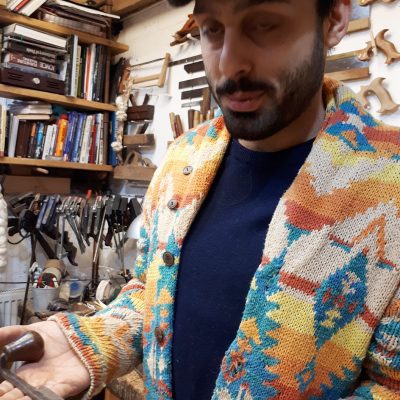 Using his axe he split the log and managed to convert it into enough parts for the spindles and other components.

Abdollah now realised that 5 days was far from enough to complete the task that had been set and in order to do this he would have to work right through the nights too.

Using a pole lathe (supplied) was no easy task: Abdollah had never had to use one previously but because he is a keen mountain biker he “had the legs” to operate the lathe and get some decent results. After 2 sleepless nights working right through he was nearing completion. And exhaustion: the pole lathe was quite forgiving in that mistakes took a long time to happen, in fact it took a long time for anything to happen on it at all .. It was not helped by the fact that the wood was wet but Abdollah resorted to the age old trick of placing the tenoned ends into a bucket of dry sand and placing it by the fire overnight to dry the wood out. The shrinkage of the “wet” mortises onto the dry tenons would then form a very tight joint.

In the words of Abdollah “everything I had ever learnt in my life saved me. I wanted to use my grandads knife in memory of him. I really don’t think they expected me to complete this task but I was determined to do it” .

Maybe it was his grandfathers drawknife that brought some magic. Maybe it was Abdollahs determination , probably a combination of both

The chair now sits in the BBC archives and will be exhibited and probably donated to a museum
The day after completion of the chair Abdollah was told that he had to now make a double bed. Sounds to me like he needs one!

The show was on on BBC2 on Friday nights - depending on your region you may be able to catch up on it if you missed it.
And a bit of backround to the story: http://www.furnituremakers.org.uk/news/freeman-to-appear-on-new-bbc-show/

to see a bit more about Abdollah and his inspiration have a look here https://nafisi.design/